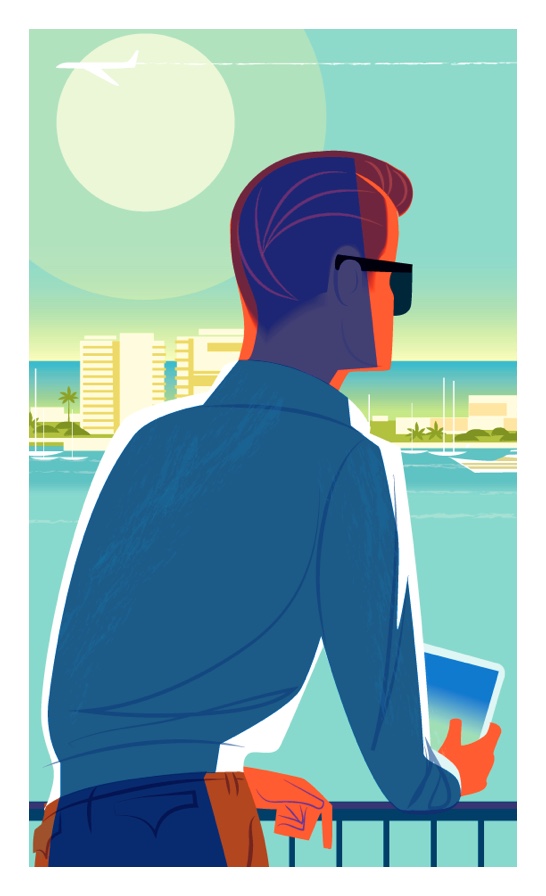 Richard Zielenkiewicz, known as Monsieur Z, is a French illustrator and graphic designer living in the south of France.

He studied at the Ecole Supérieure des Arts Graphiques Estienne (1st prize for publishing creation 1986 ETPA) and then a DESS in computer graphics at the University Marc Bloch / Strasbourg. He has worked as Art Director for major communication agencies such as EuroRSCG, BDDP, then for Roland Anstett & Associates as Creative Director. He has also worked in the press as art director and magazine redesigner.

In 1998, when he became a freelance illustrator, he worked for Wallpaper magazine, then Vogue Japon, Casa Brutus, Monsieur, ELLE, Cosmo, Esquire, etc.

Essentially known nowadays for his colorful, refined illustrations, inspired by Mid Century design and architecture, he is the author of several animated television series such as Ratz, Jet Groove, broadcast on Gulli, France Television, BBC, Netflix but also for his advertisements, on television and in magazines around the world: Redken, L'Oréal, Air France, BMW, Swiss Delice, Evian, MTV movie Awards, Guess, Malabar, Salvetat, Quick, Mac Donald US , TGV, Monoprix and many others. ..

Graphic Designer, he created the new design of the Warner Music Group's mascot, the cover of the album Death By Chocolate by De Phazz as well as the credits of the film Mensonges et trahisons with his friend Thierry Gracia by Laurent Tirard with Edouard Baer.